Zimbabwe Elections: a ‘Movement for Democratic Change’ or more of the same?

Home / Articles / Zimbabwe Elections: a ‘Movement for Democratic Change’ or more of the same? 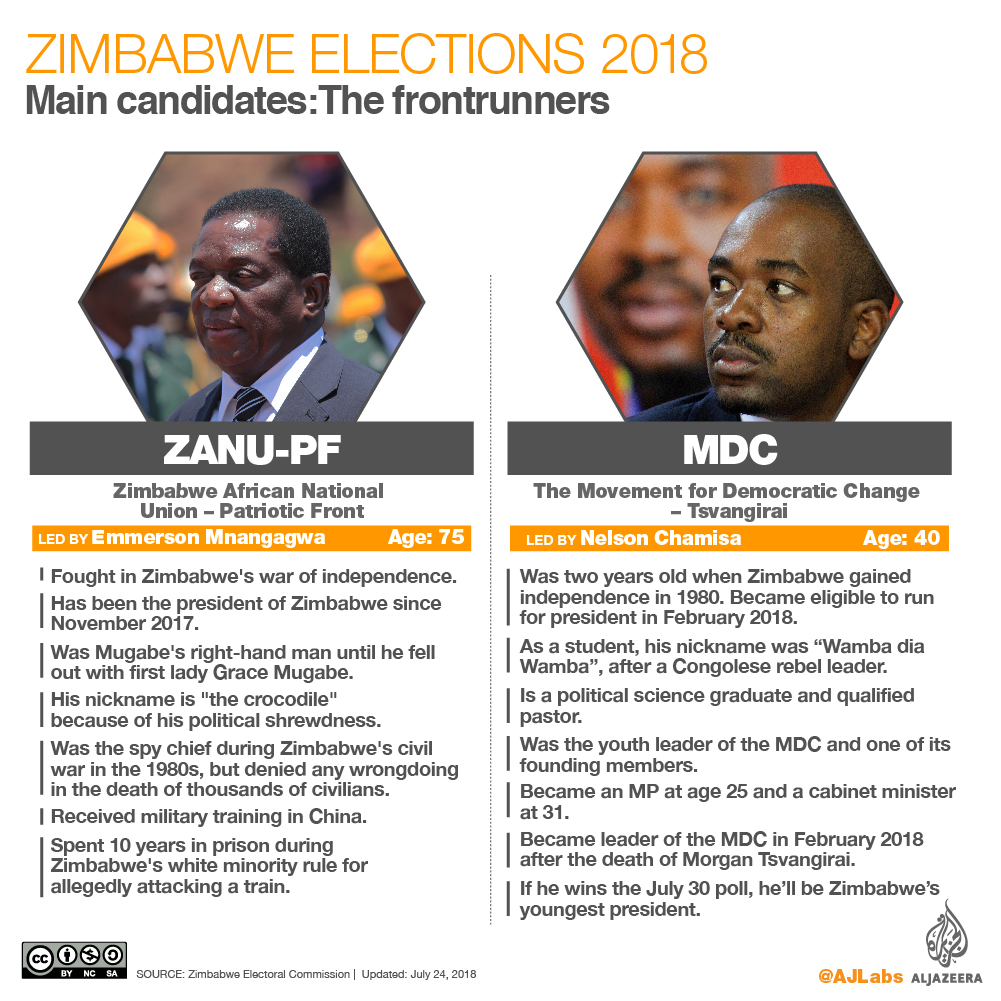 Zimbabwe Elections: a ‘Movement for Democratic Change’ or more of the same?

‘The wind of freedom’ has blown across Zimbabwe

Nelson Mnangagwa during his campaign trail for the July 2018 elections

The elections in Zimbabwe were scheduled for yesterday, Monday 30th July 2018: the first elections without Robert Mugabe as a candidate in almost 40 years.

Mugabe is now 94. The former Zimbabwean dictator was ousted as president, in what he refers to as a ‘coup’, in November 2017 last year. It was actually a military led takeover with the person who led the take over, from the military, now vice president.

Clearly Mr Mugabe still bears a grudge. He says that he won’t vote for the current president, 75 year old Emmerson Mnangagwa, of his former Zanu-PF party, who took his place after he was chucked out. Instead Mugabe said that he, along with his wife Grace, would cast their votes for the opposition party, the Movement for Democratic Change (MDC). Their candidate is the 40 year old Nelson Chamisa and if elected, will be Zimbabwe’s youngest ever head of state. 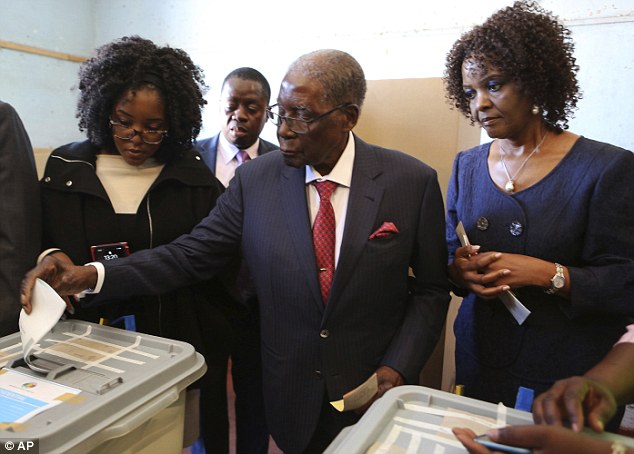 The Domination of Zanu-PF

Mugabe’s Zanu-PF party came to power after Zimbabwe’s war of independence and he retained the role of president for 37 years. Mugabe always said that his tenure as president was legitimate as he had always had elections every five years but according to the Guardian, successive elections in Zimbabwe under Mugabe’s rule were ‘marked by well-documented violence and the systematic intimidation of opposition activists and supporters’ (Guardian, 29.7.18). The media and civil society were also fiercely repressed during his time as leader of Zimbabwe.

Mr Mugabe has denied rumours of helping the MDC on their campaign trail and has said that he has never met their young 40 year old candidate, although he did cast his vote for them.

The army still have close links with the Zanu-PF party and have had since the days of the war of independence. They have insisted that the take over of Mugabe was not a military coup. Constantino Chiwenga, who led the military intervention that booted Mugabe out of office, is now Zimbabwe’s vice president under Mnangagwa. Here are the two of them together: 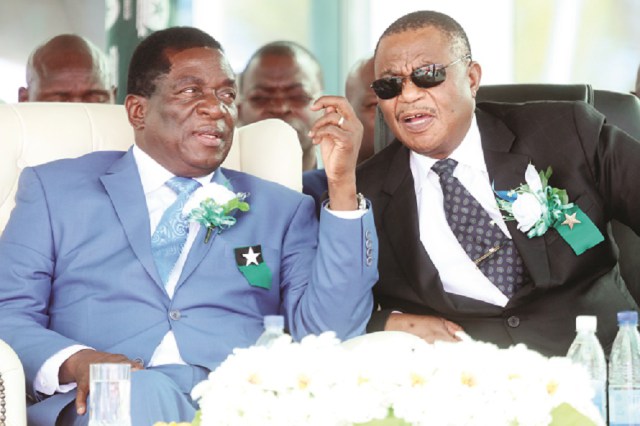 Incumbent Zanu-PF President Emmerson Mnangagwa on the left and former army boss and vice president, Constantino Chiwenga, on the right. Chiwenga led the move to oust Mugabe from office and Mugabe says they are both traitors

The temporary president who now wants to become permanent

Emerson Mnangagwa, 75, took over from Mugabe as president in November last year when he was ousted from power by the military. He represents Mugabe’s own party, Zanu-PF. Mnangagwa is a former intelligence chief (Africa News, 30.7.18).

40 year old Nelson Chamisa represents the MDC (Movement for Democratic Change). Chamisa trained as a lawyer and is also a pastor so he ‘honed his rhetorical skills in the courtroom and the pulpit’ (Africa News, 30.7.18). Chamisa is a favourite with the young where there is mass unemployment. Almost half of Zimbabwe’s registered voters are under the age of 35.

The founder of the MDC was Morgan Tsvangirai, who died of cancer in February this year.

How many candidates are there?

According to the FT, there are 50 political parties and 23 presidential candidates who have campaigned. The FT say that despite what seems to have been a relatively peaceful process so far, ‘beneath the relatively calm surface, Zanu-PF’s grip on the electoral process is as strong as ever’ (FT, 30.7.18). There are suggestions that votes were rigged months ago in Zanu-PF’s favour and that there has been an ‘over allocation of rural votes and subtle gerrymandering (electoral border fixing) of urban constituencies (FT, 30.7.18).

Mugabe’s 55 year old wife and former secretary is famous for her angry outbursts but has formerly received ‘diplomatic immunity’ for any charges against her. That will probably no longer be the case now that her husband is no longer in power. In August last year, Grace Mugabe was accused of assaulting a young model, Gabriella Engels, at a hotel in Johannesburg. Mrs Mugabe used an electric extension cord to inflict the wounds which the young model later posted on the internet. 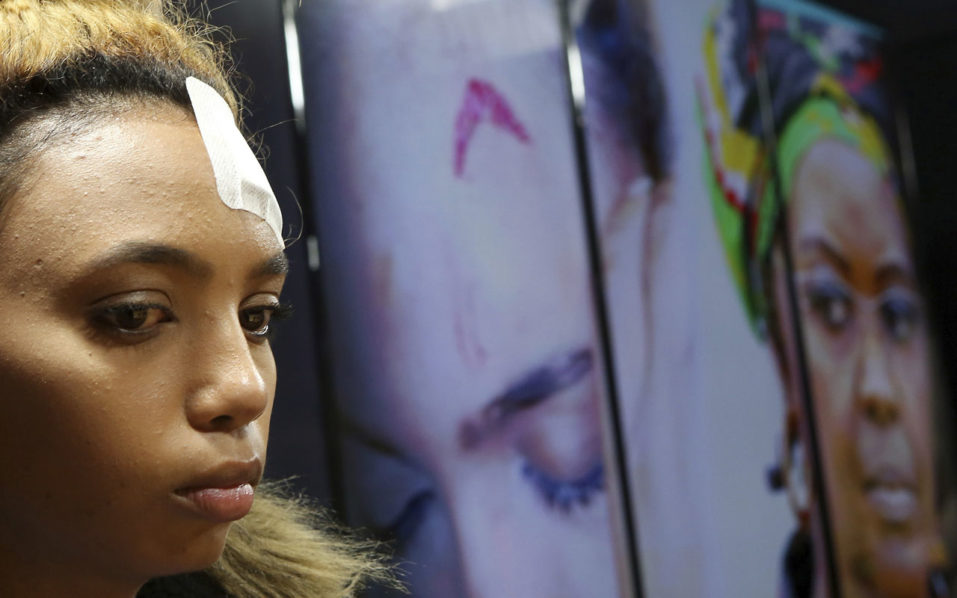 Grace Mugabe was granted ‘diplomatic immunity’ and allowed to fly back to Zimbabwe, therefore avoiding any culpability whatsoever.

It happened just 3 months before her husband was ousted from power and now a South African court has said that the immunity granted was ‘inconsistent with the constitution’ (BBC, 30.7.18). The South African court admitted that they put political diplomacy over and above the rule of law. The defence for the model have said that they want the South African government to change their decision on the issue of diplomatic immunity. Should she return to South Africa, where her and her family own many properties in ‘upmarket areas’, they want her to be arrested and put on trial (BBC, 30.7.18).

Grace Mugabe also received diplomatic immunity in 2009 in Hong Kong when she was accused of ‘repeatedly punching a British photographer who tried to take photographs of her’ (NPR, 30.7.18). 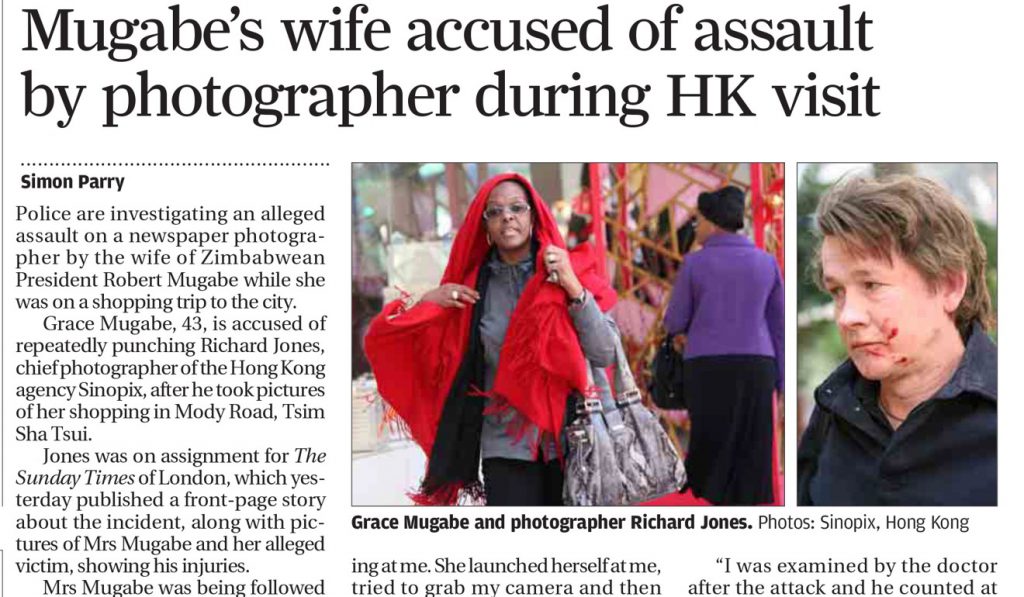 Both cases are unusual since Mrs Mugabe herself was not the head of state, a diplomat or a cabinet official. She was however interested in politics and there was talk of her taking over her husband’s role in politics when he retired. Mr Mugabe denies this.

International Monitoring of the Elections

Zimbabwe’s Election Commission (ZEC) turned down foreign funding that may have improved the election process as it would have had the adverse affect of making the elections ‘easier to monitor’ (FT, 30.7.18). The loyalty of the Electoral Commission remains tied to Zanu-PF. International observers are present but there are over 11,000 polling stations in Zimbabwe so it’s a far from easy job! Al Jazeera say that there are election monitors present from the United State and the EU for the first time since 2002 (AJ, 30.7.18). Mugabe hadn’t allowed them before. Chief EU observer, Elmar Brok, said that although things appear to have gone smoothly, despite long queues and waits to vote, there was a ‘lack of transparency in the preparation of the elections’ (AJ, 30.7.18). Despite this, he said that yesterday’s elections were better than those held in the past under Mugabe.

Here are some images of the vote yesterday. 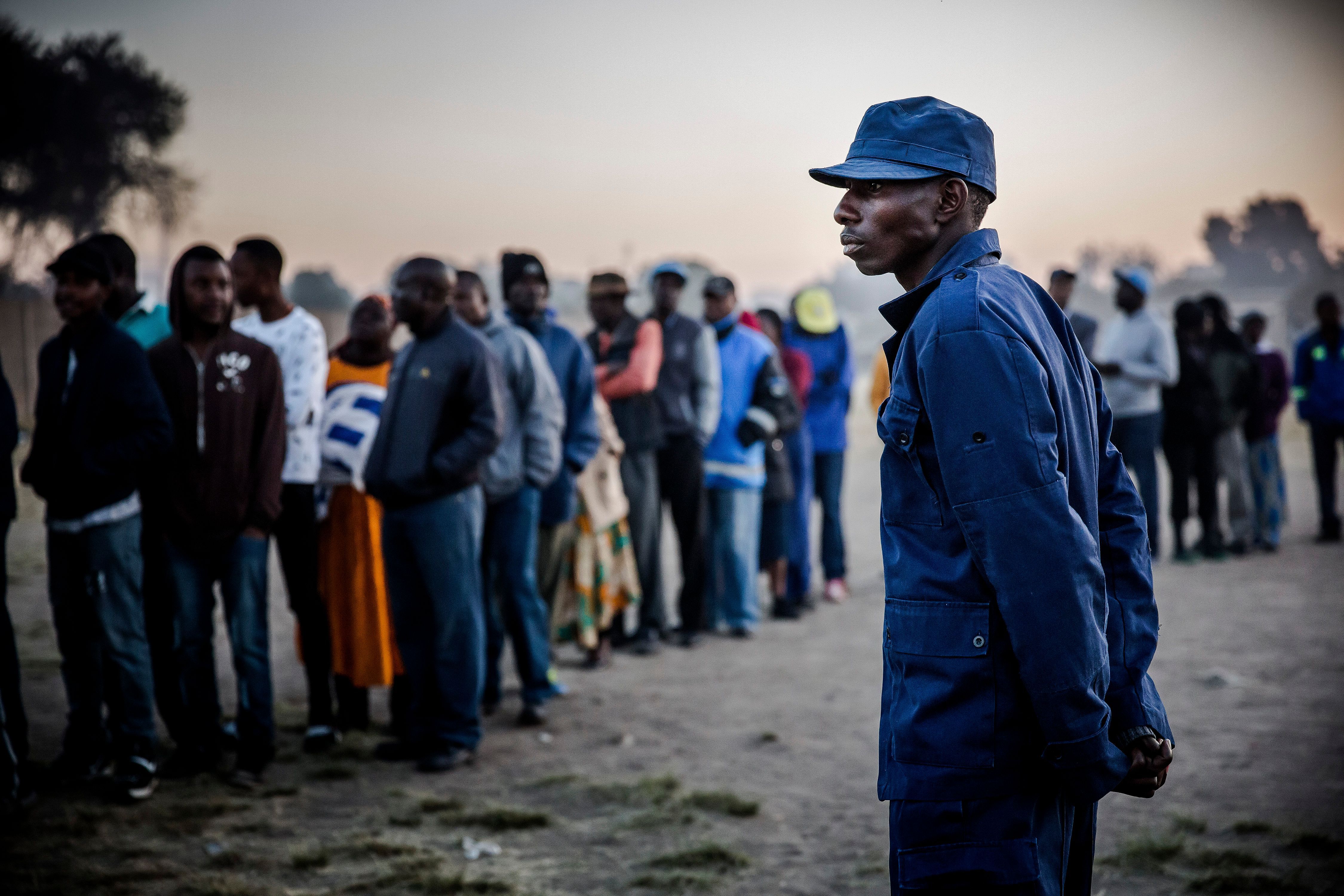 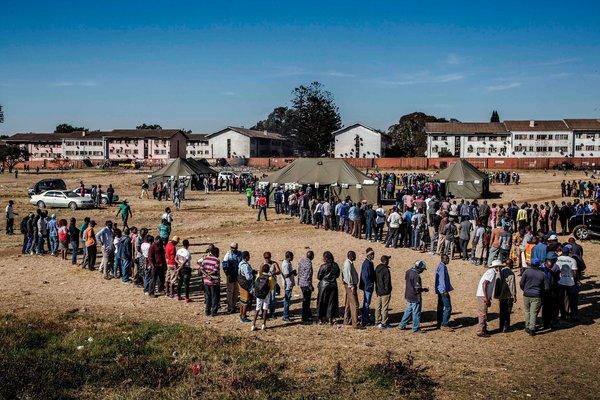 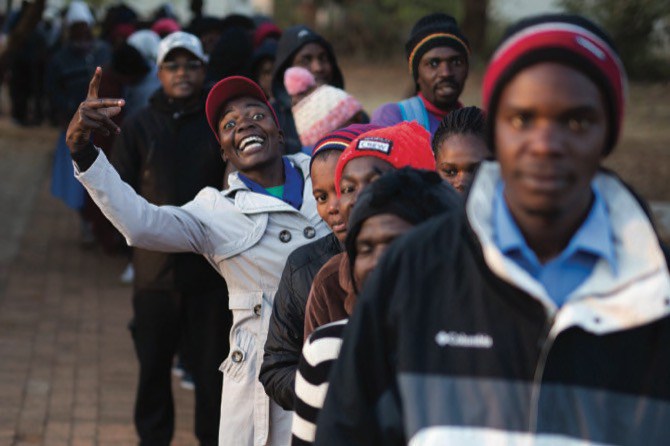 Has there been interference in this election?

Whilst the levels of outright violence are said to be less than in previous elections, nonetheless the incumbent party, Zanu-PF, has been accused of withholding food handouts from opposition supporters in the rural areas where over 60% of Zimbabwe’s registered voters live. Furthermore, the incumbent part have been accused of ‘using local chiefs to bully voters’, so a little ‘vicarious’ influence on their part (FT, 30.7.18).

What about voter turnout?

According to Al Jazeera, yesterday’s vote turnout was around 75% with more than five million people having registered to vote. Polls opened at 8am and closed at 5pm, GMT.

A presidential run off will be held on 8th September 2018 if no one candidate secures more than 50% of the votes. I suspect that this will not be needed. The deadline for the official results is Saturday 4th August.  Despite many saying that it is a close call, with Zanu-PF’s continuing influence, Mnangagwa could well have the edge. Today on twitter, both candidates are already tweeting of their impending success. 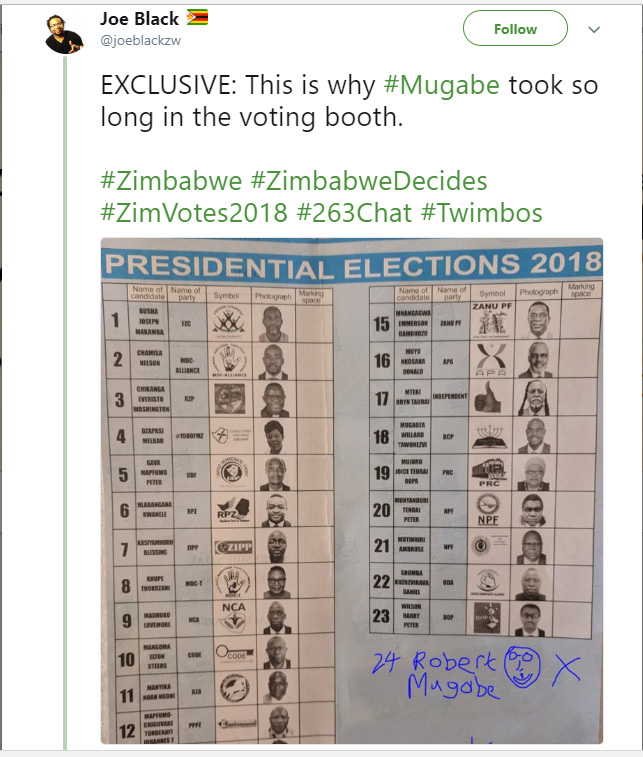 The BBC report on the attack on the British Photographer by Grace Mugabe in Hong Kong in 2009, for which the former first lady was granted ‘diplomatic immuity’:

Ellen Johnson Sirleaf, former Liberian president, is the co-leader of the National Democratic Institute’s observer mission in Zimbabwe. She is quoted in Africa News a saying that it was ‘exciting to see so many Zimbabweans casting ballots’ (30.7.18).

Mugabe and his wife Grace cast their votes:

And a closer look at the injuries: https://www.scmp.com/news/world/africa/article/2110696/zimbabwes-grace-mugabe-denies-assaulting-model-claims-she-was